“FAKE NEWS!” ITS NOT JUST THE BATTLECRY OF THE REPUBLICAN RIGHT. TURNS OUT, IT’S A THING.

THIS IS THE WEBSITE FOR AMERICAN JOURNALISM. IN COMM 122, YOU’LL GET AN INSIDERS LOOK INTO THE FAST-PACED WORLD OF JOURNALISM AND THE MEDIA. OUR CLASSROOM WILL BE A WORKING NEWSROOM WHERE YOU’LL INTERVIEW NEWSMAKERS AND PRODUCE FAIR, ACCURATE AND ENGAGING CONTENT FOR RADIO, PRINT, THE WEB AND YOUR OWN BLOGS. HOLD ON…THIS MAY BE THE MOST PRACTICAL AND ENJOYABLE CLASS YOU’LL TAKE AT SMC.

As with application courses in the Communication Department here at SMC, we are taught practical skills that we will take into our future careers and other post-grad endeavors. At the closing of SMC Today, I’ve sharpened my skills as a reporter, writer, interviewer, and media editor. Here are my top five tips:

END_OF_DOCUMENT_TOKEN_TO_BE_REPLACED 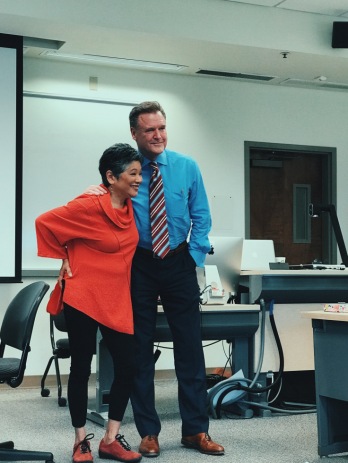 Wendy Tokuda & Frank Somerville gather together to share their experiences with SMC students. Photo by Gwen Over

Former KPIX anchor Wendy Tokuda and current KTVU news anchor Frank Somerville spoke to journalism students about life in the tv spotlight at SMC on Tuesday. Tokuda who is retired from her role on tv, was able to make use of the afternoon class time by providing her thoughts on current media and information about the nonprofit, Students Rising Above, that she helped form. Somerville contributed 30 minutes to the students before having to jet off to the news station in time for his 5 o’clock news report. END_OF_DOCUMENT_TOKEN_TO_BE_REPLACED

KCBS’s Stan Bunger visited Professor Virginia Prior’s American Journalism class, April 11, fielding questions and tracing his journey from undergraduate to morning news anchor. Bunger has been working with KCBS since he was 25 years old and has garnered critical acclaim for his reporting, including a Peabody Award for his coverage of the 1989 Loma Prieta earthquake.

END_OF_DOCUMENT_TOKEN_TO_BE_REPLACED

Covering the SF Giants Opening Day, a then-active shooting at YouTube HQ, and setting aside 90 minutes to chat with a class of aspiring journalists, San Francisco Chronicle’s Tim O’Rourke is one master multitasker. END_OF_DOCUMENT_TOKEN_TO_BE_REPLACED

Dennis Erokan is a communication professor at Saint Mary’s College. However, he is well-known beyond the classroom. Erokan founded the popular Bay Area Music (BAM) magazine, the Bay Area Music Awards, and was the former CEO of the marketing firm Placemaking Group. END_OF_DOCUMENT_TOKEN_TO_BE_REPLACED

SAN FRANCISCO — Electronic soul and folk band Alt-J took a quick break from two weekends of Coachella to make its way to the Bill Graham Civic Auditorium on Wednesday. END_OF_DOCUMENT_TOKEN_TO_BE_REPLACED

Edward Haus comes through in the clutch and leads the Saint Mary’s offense to a series victory over the University of San Diego. (Courtesy of smcgaels.com)

The Gaels finished up a five-game home stand going in 2-3 and then headed down south for a WCC matchup against the University of San Diego for the start of their eight-game road trip. Despite the losing home stand, Saint Mary’s was able to gain momentum by winning the final two games and carry that forward into their road series at USD. The team took two out of three games from the Toreros (7-8 WCC) and improved their conference record to 8-7. San Diego took the first game of the series 9-8 in a shootout, but Saint Mary’s battled back, winning the final two games 6-5 and 16-2. END_OF_DOCUMENT_TOKEN_TO_BE_REPLACED

In a nation divided, how can we stand? An event titled “Bridging the Political Divide” tackled this question. Hosted by the Politics department on April 19, the event was led by Nina Moore, a professor of Political Science at Colgate University, and sociologist Arlie Hochschild, Professor of Sociology at the University of California.

The two speakers opened with their concerns about the growing political divide in the United States between liberals and conservatives. This divide, they claimed, is weakening our nation and challenging our notion of what it means to be an American.
END_OF_DOCUMENT_TOKEN_TO_BE_REPLACED

The Bold Type”, which premiered on Freeform last summer, is a television show that encourages women to be bold in both their personal and professional work lives while educating viewers about intersectional feminism. The plot follows the relationship between Jane, Kat, and Sutton, three friends who live in New York City and work at a magazine. It reminds me of a younger version of Sex and the City, as it deals with the relationship between three best friends navigating New York City while they explore their different love lives, share secrets with one another, and balance work with their personal lives. END_OF_DOCUMENT_TOKEN_TO_BE_REPLACED