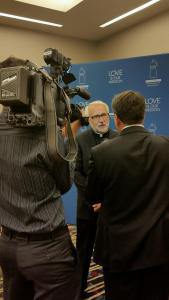 Collegian: Saint Mary’s College of California’s American Journalism students were in for an informational treat last week when their class partook in a FaceTime conversation with the college’s own Father Michael Russo. Father Russo, a previous Communication Studies professor at SMC, contacted the class live from Washington D.C., where he is serving as a member of the press for Pope Francis’ arrival to our country.

Father Russo is a member of the United States Conference of Catholic Bishops media staff and was brought onto their team to assist in last Wednesday’s worldwide coverage of the Mass held on the Catholic University of America’s campus. The mass drew in about 25,000 people at the National Shrine of the Immaculate Conception, with 20,000 more bodies surrounding it.

From the control room, Father Russo worked with more than 20 cameras to keep the 2 ½ hour long event lively and interesting for the millions of viewers at home. He said producing an event like this is “like the choreography of a ballet–there is a beginning, middle, and end.” Father Russo also said that anyone covering an event like this should cover it in the same way a reporter would cover the Rose Bowl– they need to appear “excited, happy, and knowledgeable.”

Throughout his journey on the East Coast, Father Russo has continued to post on his blog, The Francis Factor, a self-run blog that centers around media and ministry. Followers of The Francis Factor can expect to see detailed descriptions of what his day-to-day experiences have been like covering this historic event in our nation.  In his most recent post, Father Russo expands on the excitement around last Wednesday’s Mass.

He states, “Everyone gets concerned when Pope Francis goes off text, and our job is to know and report what the Pope is saying even in those unscripted moments.”

In addition to producing and blogging, the Communication Studies expert will also be contributing to ABC News’ The Note, which is a  political blog from Michael Falcone, the deputy political editor in Washington. Father Russo will be giving the politically oriented blog a religious twist during the rest of the Pope’s visit to the United States.

Getting the “insider” perspective on the media coverage has been beneficial for the SMC journalism students. During the videochat with the class, students were encouraged to ask Father Russo questions about his experiences working for the media. One student asked Father Russo how difficult it is to obtain a press pass for an event such as this one. Father Russo stated that the process is extremely difficult, and that it involves an intensive background check involving social security information.

The students thanked Father Russo for his time and showed their gratitude for the field knowledge they were exposed to during the conversation. In his final statement to the class, Father Russo shared, “All I can say is ‘Go Gaels’.”